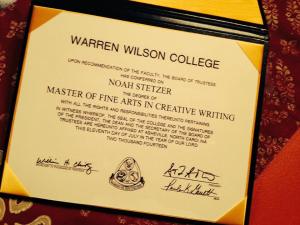 *This is the personal essay that I submitted as part of my application to Warren Wilson in the very early days of 2012.

1.
Like most, I started with good intentions. At sixteen, I attended the Young Writers’ Workshop at the University of Virginia working in Poetry with Nick Bozanic, Dana Roeser, and Cornelius Eady. Afterward, I attended classes/workshops in Poetry at the University of Pittsburgh taught by Jeff Oaks, Lynn Emanuel, and Judy Vollmer. At that time, I was drawn to Whitman for his lyric, to Sexton and Olds for their brutal precision and candor, and to Li-Young Lee because of his restraint. While attending Pitt off and on, I began to pursue a fulltime career as a retail store manager. I became successful in that role and decided to apply myself completely to that job—securing a financially independent life. I continued to read voraciously but didn’t write much.

2.
On Sunday, January 10, 2010 my HIV/AIDS diagnosis felt like the manifestation of my mistakes. My hospitalization, with collapsed lungs and sixty-five T cells, gave me time to reexamine my life and my choices. Frankly, they thought I was about to die–called the family to Virginia, and we all waited. I came close. But my unexpected recovery allowed me the chance to reconnect with the young man I once was, the man who begun a pursuit of writing. I started again by writing every day, then making a reading list of poets—one book a week. I asked friends and mentors for recommendations. I read that way for a year. By early 2011, I enrolled in a Poetry Workshop under the direction of Charlie Jensen at The Writers’ Center in Bethesda, Maryland, and was reminded of how much I enjoy the workshop experience.

3.
I use my writing to flirt with my past, to address my health, and to document my perceptions through a new [infected] lens. I find myself using language in a way I never thought I would—to say things I never thought I’d say. I am currently reading works to find where I might fit in. I’ve been reading and rereading gay male writers–Dlugos, Monette, Merrill, Gunn, Powell, Doty, to name a few. I have found inspiration from poets outside that group, too–Donald Hall and his book Without is a good example. Hall’s use of frank medical descriptions balanced against the quiet suffering shared between he and his wife struck the kind of chord to which I can relate. I read in his book a way that poetry could speak about the messy business of dying but still attend to language with passion and precision. Around the same time, I read Dan Bellm’s One Hand on the Wheel. It was in this book that I saw the tactic of form used as a tempering agent, the way the intricacies of a sestina delicately hold something as thermonuclear as Bellm’s relationship with his father. These are both the kinds of books I look to write—cathartic but not self indulgent, fragile but powerful. I am prepared to work to find what my writing lacks, what I find in both Hall and Bellm: a level of restraint. Perhaps because I cut short my initial poetry training, my work sometimes appears to explain too much or too little. Like my latest poet of choice, Patrick Donnelly, my work is heavily influenced by sound and image, and I am aware now of how much more there is to making poems.

4.
From Doty’s “Atlantis,” I borrow the line, Lucky we don’t have to know / what something is to hold it to express where I am with my writing. My plan is to find out what my writing is capable of doing, to test myself in formal poetry, to inform my writing through rigorous reading and analysis, and to inhabit a community of writers with whom I can argue and from whom I can learn. I was a successful Barnes & Noble Store Manager, directing multi-million dollar stores. My experience at B&N provided me the ability to work independently and with remote supervision. The manager role also allowed me to hone skills in strategy, leadership, collaboration, and adapting to learning styles. These are qualities I imagine will be useful as I pursue the work of poetry and writing.

5.
Rukeyser assures me, …it is a great thing to come to the unbegun places of our living and to say: Now we will find the words. My pursuit of a formal education is about regret and courage. I do not regret my life of independence and success. But I regret not writing. I regret not having pursued what I know I have to do, which is putting words to what I see. I am writing now because it helps me to be fearless.

6.
If this was a bucket list thing, I could self-publish a book and then be done with it. But that’s not the point here. I intend to pursue an apprenticeship with a community of writers so that my work and I can flourish. I’m after the focused work inherent with apprenticing with a Master Teacher. I want to write the world the way Annie Dillard’s Pilgrim did. I, too, see something eternal in the flash of clouds against mountainsides; I need help to say that right.

Tim Dlugos tells me, Needing drastic forms of admiration is a virus.

[I still turn this over and over in my hands.]